If you need a smartphone, a camera or some other gadget, buying a microSD card seems like a very simple thing to do, right?

However, there is much more to them than you realize. It’s surprisingly easy to end up falling into a series of pitfalls: paying too much, performing poorly, or the card does not work.

5 Common Mistakes to Avoid When Buying a MicroSD Memory Card

Let’s take a look at the mistakes you need to avoid when buying a microSD card.

All microSD cards fit into all slots, but not all of them work. There are four different card formats as well as different patterns, and these determine compatibility.

The three main formats are SD, SDHC and SDXC (or microSD, microSDHC and microSDXC – micro and integer cards are based on the same specification). The fourth format is the SDUC. It was announced in June 2018, and will take some time to be available.

Each format is defined in the SD specification, but they do not work in the same way. As a result, the formats are not backwards compatible. You can not use newer cards on hardware that only supports older formats.

The differences between the formats are significant:

In addition to verifying that the format of a card is compatible with your hardware, you also need to check out some other details.

Hardware that supports microSDXC slots will not automatically support all card sizes in this format. The Samsung Galaxy S9, for example, officially supports cards up to 400 GB. But maybe a 512GB card will not work on it.

And if you plan to use your microSD card with your PC at any time – for example, to move files – you also need to ensure that your PC supports the file system with which the card is formatted.

MicroSDXC cards use the exFAT system by default. Windows has been supported for more than a decade, but macOS has only been released since version 10.6.5 (Snow Leopard).

SDHC and SDXC formats can support the Ultra High Speed (UHS) bus interface – a faster circuitry that allows data to move at a faster rate. The three versions of SUS are UHS-I (with bus speed up to 104MBps), UHS-II (up to 312MBps) and UHS-III (up to 624MBps).

To benefit from the increased UHS performance, your hardware needs to support it. UHS memory cards will work in older slots, but with a reduced bus speed of 25MBps. Identifying the speed of a microSD card is even more complicated than deciphering formats and compatibility. There are no less than six ways to show how fast a card is, and it is not uncommon for manufacturers to use all of them.

Speed Class shows the minimum recording speed of a memory card in megabytes per second. There are four speed classes defined as follows:

Showing basic level performance helps you identify whether a card is suitable for a specific task. But since it does not tell you anything about maximum speeds, it is technically possible for a Class 2 card to be faster than a Class 6 card. Class 10 cards should always be faster, as they have a bus speed of 25 Mbps ( compared to 12 Mbps on Class 2 to Class 6 cards).

The UHS speed class shows the minimum write speed for microSD cards that support UHS-I, II, and III bus speeds. We are listing this as a separate category because some manufacturers list both classes on their cards. The two UHS speed classes are: 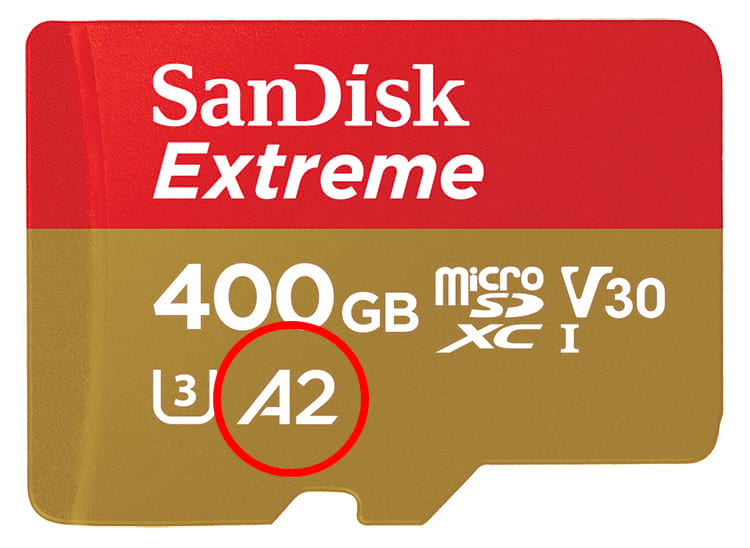 The application performance class is something you can observe when you’re planning to install Android applications on a microSD card. It is not a necessity, however, as cards without the A rating may still perform as well, if not better.

The video speed class defines a minimum sequential recording speed, which is essential when recording video. The higher the resolution of your video, the higher the speed you need. There are five classes for video:

While it is generally safe to assume that a higher speed class correlates with faster overall performance, and even faster UHS cards, some manufacturers also cite a top speed for their products.

These speeds are in megabytes per second, and help you choose the absolute fastest cards. However, speeds are based on manufacturer’s testing, so they can represent an ideal scenario, rather than actual performance.

In practice, there are other external factors that will affect read and write speeds. If you are copying files to your PC, for example, the specifications of your PC – and even the USB cable you are using – will play an important role.

The other way for manufacturers to show the speed of their cards is a setback for the old days of burning CDs. The original transfer rate for CDs was 150KBps. As the units develop, they advertise themselves as being 2x, 4x, 16x, and so on, showing how many times they are faster than 150KBps.

You will often see microSD cards labeled this way. When a card is described as 100x, that means 100 x 150KBps, which is 15MBps. This speed is again under ideal laboratory conditions.

When you buy a microSD card, it is important to choose one that is correct for your intended use. This means that the card should be sized and fast enough, but not necessarily the largest and fastest card in the market. The high capacity U3-U3 U3 cards are often still priced high, and you will not always notice the benefits they offer.

The SD Card Association recommends UHS Speed Class 3 (U3) or better for 4K video. For full HD videos, the organization suggests class 10 or class 6. If your card’s write speed is too slow, it will knock down frames and produce video in a stuttering way.

For photography, some users prefer multiple smaller cards to a large one, thus minimizing the risk of losing all their photos if a card is corrupted. If you are recording RAW, where the files can be 50 MB or more, you will benefit from having U1 or U3 speeds (but they require at least SDHC format).

And if you’re wondering, there’s no difference between a full-size SD card and a microSD card in an SD adapter. If your camera has only one SD slot, you can still use a microSD card.

It seems an obvious thing to avoid, but unfortunately, fake memory cards exist, and in large quantity.

If you find a very cheap memory card, or an unknown brand, there is a real risk that it may be counterfeit. In fact, a few years ago, a SanDisk engineer said that about one-third of all SanDisk branded cards were counterfeit. It is unlikely that this number has diminished.

If you are buying from a source you are unsure, such as Facebook Marketplace, OLX, Free Market and other buying and selling sites, read the reviews before making a purchase.

Counterfeit cards correctly inform the capacity shown on the packaging, but actually contain much less.

Almost everyone has had a memory card that has stopped working for no apparent reason. While reliability is generally excellent, microSD cards fail, and when this happens, you lose everything you stored in it.

For this reason, buying cards from well-known brands is always better than buying cheap cards. You can expect better performance, higher levels of reliability and robustness, plus cards protected from shock, water and even airport X-rays.